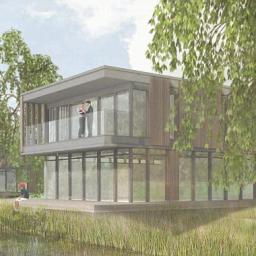 Of course these solutions are no help if it is just the value of your house and mortgage that is "underwater".

If you're afraid your house might be flooded out, and you're bound and determined nevertheless to build it in such an unsuitable place for whatever reason, why not just build it on stilts in the first place, rather than go to all the trouble to put in stilts AND a mechanism to allow it to ride up on those stilts?

The articulation to allow it to climb and descend the stilts constitutes a vulnerability. What if one or more points binds, and it cocks and jams because it's trying to rise crookedly?