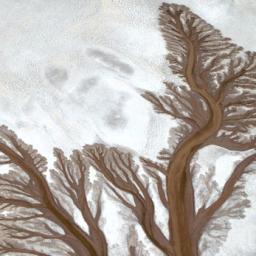 The Colorado River Delta is typically a vast expanse of cracked, dry earth. The Colorado River itself comes to its end at the Morelos Dam on the US-Mexico border, and its outflow has been managed (poorly) by both nations ever since the dam was built. That means the river has been providing lots of drinking water and water for irrigated agriculture, but not much for any other reason.

That has suddenly changed, as both nations agreed to permit a flow of 1% of the water to be released for purposes of restoring parts of the ecosystem. From the article:

"We were able to persuade decision-makers in both countries that it was really time to turn the corner in the relationship and really try something different," [Environmental Defense Fund representative Jennifer] Pitt said. "That instead of unilateral actions on either side of the border with no particular concern for impacts on the other side of the border it would be better to have a collaborative approach." In 2012, the Mexican and American governments signed Minute 319, and the pulse flow was one of the provisions it contained. ... "During the months of late March and April, with the snow melt in the upper basin, a lot of water will come in a short period of time," he said. "So the pulse flow is mimicking that on a smaller scale." During the eight-week project, which ended on Sunday, just less than 1 percent of the riverâ€™s annual average flow was released into the delta. Teams of scientists from environmental groups and universities have been closely monitoring the impact that the restored flow has had on this desiccated region.

[Ed. note: Glad to have some good environmental news for a change.]

National Geographic has a series of posts about the Colorado River Delta with a lot more information.