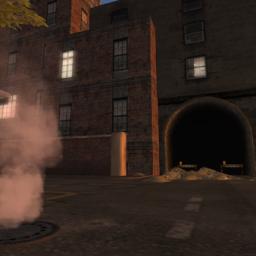 Laura Hall over at Atlantic Magazine asks: what happens when digital communities are abandoned? Although she covers the closing of Geocities, she's really more interested in the virtual worlds we build in our MUDs and immersive games. Though they swarm with players for long periods of time, as user interest wanes and gamers go elsewhere, then what do they look like?

When Second Life launched in 2003, the world was captivated by visions of Neal Stephensonâ€™s Snow Crash come to life. The virtual world isnâ€™t a game--itâ€™s a venue, a platform, a plot of undeveloped land, a blank canvas, an open world. Users make of it what they will. ...

But that was nearly 10 years ago. I wondered: what happened to all of those buildings? Were people still making use of them? So I logged in. The world of Second Life, it turns out, is not abandoned. Estimates put the current active user-base around 600,000 members; in its heyday, it boasted between 60 and 80 thousand simultaneous logins. There are often a handful of people in most of the spaces youâ€™ll visit, but itâ€™s easy to find privacy. Here and there are signs that point to its lack of people: â€œspace for rentâ€, â€œband wanted.â€ But the sheer variety of environments, and the obvious care that people put into them, remains stunning.

Would Slashdot, SoylentNews or Pipedot (Score: 1)

be considered digital communities that may or may not be abandoned in coming years -- or does it have to mean a place with graphics?