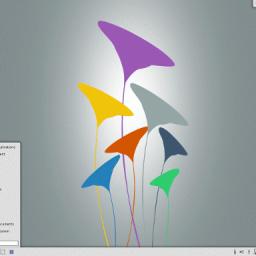 This Friday's distro is KaOS Linux, and the K stands for KDE. But this isn't just a "lean KDE distro," as is their motto: the focus is quite a bit better defined even than that:

The idea behind KaOS is to create a tightly integrated rolling and transparent distribution for the modern desktop, built from scratch with a very specific focus.
Focus on one DE (KDE), one toolkit (Qt), one architecture (x86_64) plus a focus on evaluating and selecting the most suitable tools and applications. ... It targets users who have tried many Operating Systems/Distributions/Desktop Environments and have found they prefer a Distribution that uses all its available resources to work on one DE to make that the best it can be, and know that after their searches, the best for them is KDE.

The KaOS Linux website was my first reference point for familiarizing myself with this distro, but we're lucky in that it's recently gotten quite a bit of press, too. ZDNet looked at it and called it "solid and focused: The reviewer wasn't thrilled with the installer but found it a reasonable package selections (that even transcends the "QT only" philosophy by also providing LibreOffice and GIMP). And HecticGeek also gave it a spin, though the site was down as I write this.

For me, the killer decision point is really the choice of the Calligra office suite as primary productivity suite. And the fact that LibreOffice is in the repos tells me that it is still not totally baked as an office suite; too bad because I've always rooted for what was once called Koffice and would love to see it blossom, though it always seems to let me down: font kerning was still a mess the last time I tried it in 2012.

Anyway, the folks behind KaOS admit this distro isn't going to be for everyone. But for people that have tried the other options and decided on KDE, this is a distro that promises you that all its effort has gone into ensuring this KDE-centric distro gives you a great experience. I'm looking forward to giving it a whirl.

Well, I love KDE, and have a 64-bit machine and no strong connection to my current distro, Kubuntu. Next time I get the itch (or something breaks), I think this will be the one I go to!

Thanks for posting it. The two reviews were good links, covering different aspects of the experience.