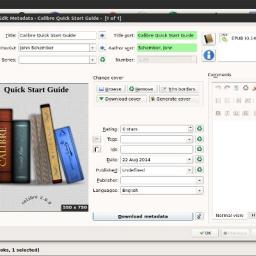 As a writer and avid reader, I find the Calibre ebook manager/editor invaluable. Not only does it allow you to produce, fix, or edit ebooks, but it's a good ebook reader app on its own if all you want to do is read an EPUB on your computer. When I wrote and published The Dictator's Handbook, Calibre played an important part of my workflow as I took LaTeX source code and turned it into an epub.

And it's just gotten better. Version 2.0 is out, with huge improvements and additions in functionality.

According to the changelog, Calibre now has an e-book editor capable of editing books in the EPUB and AZW3 (Kindle) formats, with many powerful tools and features specially designed for making editing e-books easier, users now have the ability to compare books, which allows them to see all the differences between two books, highlighted, side-by-side, and it's now possible to connect to any Android phone or tablet on OS X and the application should automatically detect and connect to it.

It's worth noting that Calibre has also switched to Qt 5, which means that the interface should look a lot more modern and it should integrate much better with the operating system. Also, a number of improvements have been added to the way the library is now organized, which should make the entire experience much more streamlined.

Last I checked, it runs on just about every major desktop OS platform. I run it on FreeBSD and Linux.

Re: Can we get a little better performance? (Score: 1)

This is a lowly P4-2GHz with 1.3GB RAM and WinXP. Everything else runs fine (sufficiently well that I'm not terribly motivated to replace it); Calibre is notably sloggy. I don't put =any= books in its library, and occasionally I clean out the trash it leaves in %Temp%.

The bookmark script frequently hangs, too: "A script on this page is running slowly. Do you wish to stop the script? Yes/No" and once it does that, the script will never complete and will sometimes crash the whole program. If it's done it once on a given book, it will do it again in that same part of the file, tho I haven't pinned down a common factor, other than it's more likely with larger files.