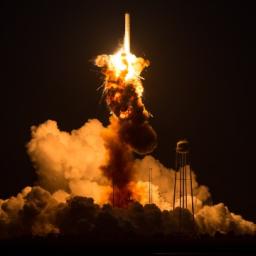 An unmanned NASA-contracted rocket exploded early Tuesday evening along the eastern Virginia coast, causing a huge fireball. Video shows the rocket rising into the air for a few seconds before an explosion. It then plummets back to Earth, causing more flames as it hits the ground. NASA tweeted that the failure occurred six seconds after launch. Afterward, the launch director said on NASA's feed that all personnel were accounted for and that no injuries were reported.

According to NASA, the Orbital Sciences Corp.'s Antares rocket and Cygnus cargo spacecraft were set to launch at 6:22 p.m. ET from the Wallops Flight Facility along the Atlantic Ocean. It was set to carry some 5,000 pounds of supplies and experiments to the International Space Station. Since the end of NASA's space shuttle program, it has relied on private companies -- specifically Orbital Sciences and SpaceX -- to bring materials to the space station, albeit using NASA facilities for launch. Tuesday's launch was supposed to be the fourth flight for Orbital until it ended, as the company acknowledged in a statement, in "catastrophic failure." Marking the first accident since NASA turned to private operators to deliver cargo to the International Space Station.

Now we can't even get a rocket into space. Perhaps we can pay Russia to do it for us?