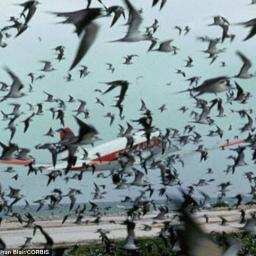 It has long been a mystery why quick and agile birds cannot out-maneuver automobiles and jetliners. This results in the deaths of thousands of birds every year and can injure drivers or cause potentially catastrophic jet engine failures. It's been estimated that bird strikes cause $400 million of damage every year in the US and up to $1.2 billion damage to commercial aircraft globally.

To work out why the strikes happen, a team of scientists from the US Department of Agriculture's National Wildlife Research Center in Ohio, Indiana State University and Purdue University, also in Indiana, used virtual reality, to avoid injuring birds. Researchers found that birds start to fly away from a vehicle when it is 98 ft (30 meters) away, no matter its speed. Thus they left too late to escape vehicles traveling faster than 75 mph (120kph).

The scientists suggested that installing lights on aircraft could warn the birds to flee from a longer distance away, reducing avian deaths.

In my defense, I had a horrible night of sleep wednesday night. Also, the font on this site is awfully small on my 4K monitor, and...