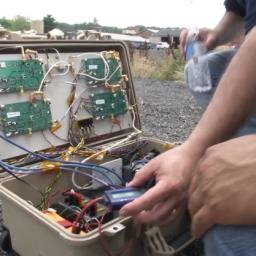 Search-and-rescue technology developed in part by NASA helped free four men trapped under 10-feet of debris in Nepal. The two-year-old FINDER tool users microwave-radar technology to detect heartbeats of people trapped in wreckage. Following the April 25 earthquake, two prototype FINDER devices were deployed to search teams in Nepal. Arriving on April 29 to assist with rescue efforts, the FINDER tools detected two heartbeats beneath two different collapsed structures in the village of Chautara, where the four men had been trapped for days.

The device has previously detected people buried under up to 30 feet of rubble, hidden behind 20 feet of solid concrete, and at a distance of 100 feet in open spaces, but "The true test of any technology is how well it works in a real-life operational setting." A new "locator" feature also provides confirmation of a heartbeat, and the approximate location of the trapped individuals within five feet.

Anyone else wondering if scientists look to video games for inspiration for new technology?