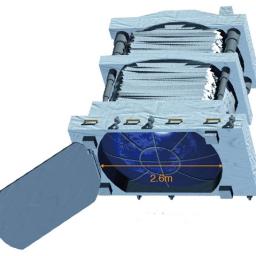 According to NASA, there is almost 3,000 tons of space debris residing in a low-Earth orbit. This includes old, derelict satellites, leftover rocket parts and bodies, and other parts and tiny bits of wreckage produced by collisions of other larger objects. Impacts from this junk can cause damage to satellites due to their speed, as most are traveling about 22,370 miles per hour. As more and more satellites and spacecraft are sent into space, the problem of space debris is growing. Most spacecraft, including the International Space Station, can withstand impacts from most of the smaller junk in the neighborhood of 0.4 inches due to the shielding on the crafts. However, there are more than 700,000 pieces larger than that currently in orbit. While items larger than 4 inches are easy to spot, the ones between 0.4 inches and 4 inches in size are difficult to identify and dodge.

Researchers at the Extreme Universe Space Observatory could be getting a powerful laser installed in the Japan section of the International Space Station to help shoot down the space junk. Once the EUSO detects space junk, the Coherent Amplification Network laser would then blast the debris, burning off a thin film of matter from the surface and nudging the junk downward to burn up in Earth's atmosphere. The full-scale version would be armed with a 100,000-watt ultraviolet CAN laser than could fire 10,000 pulses per second. Researchers believe that this could blast space junk from a range of about 60 miles.

How do they get the energy for the laser? (Score: 1)

The ISS is only solar powered. What is their storage capacity? How long does it take to 'recharge'?