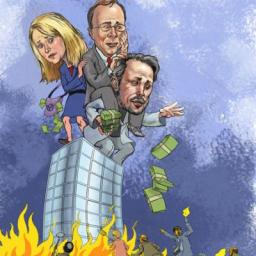 I hadn't thought of that, but what you say makes sense. It's easier to negotiate salaries up than down, in general. There's a perception aspect to salaries anyway, especially when the economy is doing well. You don't want to lose people to competing firms, so you try to pay a little higher. Everyone else does it too, and suddenly everyone is overpaying for relatively shittier quality personnel.