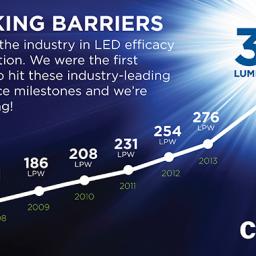 Even for household applications, compact fluorescent bulbs often have a higher efficiency rating (in terms of Lumens per Watt) than LEDs. However, LED bulbs are pretty close, especially when compared to incandescent, and are still improving. Add in the instant startup, the more focused output, and the whole no-mercury thing, and it's no wonder why the new LED technology is quickly becoming the new "green" favorite.