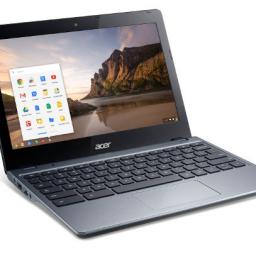 Re: The Economics Are Ridiculous (Score: 1)

This thread just cost us $230. The spousal unit teaches online courses in the summer and would like to untether from his desk. He's got a tablet, but it's not sufficient to the task. We have an old netbook, but ... netbook. He's got a laptop, but it's long in the tooth and short on battery life. He's been eyeballing the MacBook Air 11, but it's pricy and hasn't updated adequately in a very long time. If one is going to spend that many $$, one wants a bit more in terms of screen, power, storage ... all of it.

Realizing all that, he was at the point of deciding whether to spend $$$ on a prior-gen MBP 13, or wait to see what possible updates might be on the horizon for the MBAs, when this thread got started. I poked around, found the Acer C720, looked into whether slapping elementary OS on it was a thing (it is), and floated the idea to him: "So ... it's kinda like the netbook of today, but better and more useable ... you could think about maybe this for $230? It wouldn't be an MBP, but it'd be ... it'd be $230." Sold. It arrives Tuesday. I can't wait to get my grubby, little fingers all over it.

A few questions, though, assuming anyone is still looking at this days-old thread: