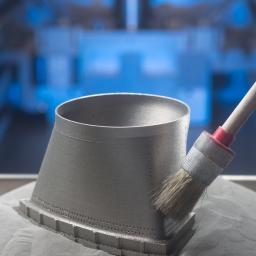 An article in Power Magazine discusses how manufacturers of power generating equipment are planning to use 3D printing in metal for production of complex machinery parts:

Siemens announced in December that it would begin using 3D printing - also known as additive manufacturing - to produce replacement burner components for gas turbines rather than using conventional methods. It said that for certain types of turbines, repair times can be cut by as much as 90%.

Meanwhile, GE Aviation announced that it would contract with Swedish company Arcam to produce 3D-printed components for its jet engines. Its oil and gas division plans to start pilot production of 3D-printed gas turbines fuel nozzles later this year. With conventional manufacturing methods, the nozzles are assembled from 20 separate parts, but with 3D printing, they can be created in a single piece.

NASA used similar methods previously to manufacture parts for the J2-X engine, according to this article at Extreme Tech . So, how far will this technology spread? How long will it be before consumer-oriented metal objects are being printed just-in-time at your local department store?

GE is outsourcing to Arcam Systems, everything in the article points to Siemens doing it inhouse, though they don't mention if the machinery is theirs or purchased from someone else. Found a few other articles from them, http://www.industry.siemens.com/topics/global/en/magazines/industry-journal/1-2013/pages/3d-printers-the-future-has-already-begun.aspx and this video shows the machine they're using: http://www.manufacturing.net/news/2013/12/siemens-3d-prints-toughest-christmas-tree-ever which seems to come from MCP systems.. found this talking about their tech: http://www.youtube.com/watch?v=4odUhDjKHzo, though I think they may have been renamed.