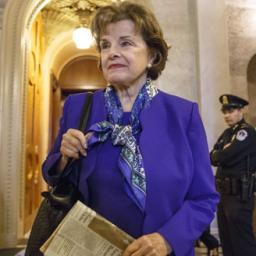 Feinstein had given firm support for the NSA's phone call tracking program just last month while criticizing Snowden for being a runaway whistle-blower who could have instead turned his documents to Congress.

"What keeps me up at night, candidly, is another attack against the United States. And I see enough of the threat stream to know that is possible," Feinstein said at a Pacific Council on International Policy dinner in Century City.

"But the way we prevent another attack - and this is tricky - is intelligence," she said. "You have to know what's going to happen, because it's too late otherwise."

"There are all kinds of things that are going on. And for some reason, the fear of our government for a bona fide reason, which is to prevent a terrorist attack, raising this kind of concern, when there are only 22 people in our country who have access to this database and every one of them is vetted,"

Apples and Oranges. Try to remember that because somebody disagrees with you on one issue, they may in fact just have different views and may not be some sort of government robot.

This has absolutely nothing to do with the NSA, Snowden, or anything else you quote.

And there is no reason it would. This is about Congressional oversight of the CIA. I would hope everybody in Congress, regardless of their views on National Security policy, the Patriot Act, etc., would all agree that the CIA should not spy on and intimidate Congress.

Senator Feinstein's outrage is justified, and she is a hypocrite as Snowden charges.

Her mistake wasn't getting upset when they peeked under her skirt. It was justifying every other instance of spying (on us) as ABSOLUTELY NECESSARY OR OMG THE TERRORISTS ARE GONNA WIN!!!!

Do you even realize that the CIA and NSA are different agencies?

I heard they now have kickass.to option for that web-video.

"Is Senator Feinstein's outrage justified, or is she a a hypocrite as Snowden charges ?"

Yes. Or no, really. Does it have to be one or the other?