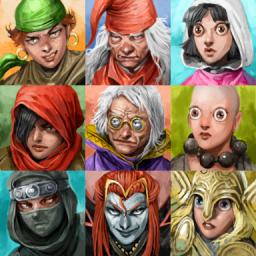 I'd say that a work can only be sexist or racist if its creator doesn't mean for it to be. Intentional racism is generally either a bad joke or a troll - done to provoke. The KKK isn't intentionally racist, assuming that they actually believe what they preach.

As for the folks in the article, these people seem to be searching for something to feel guilty about. There are some real negative stereotypes, but smooth skin? Homogenised facial structures (whatever that means)? Their solution seems to have been to make all of their female characters either old or weird looking, and from a player's perspective (male) I kinda like that. Putting so much thought into the portraits seems to have given them more character than most. However, there's nothing particularly enlightened here - no one likes to fantasize about being ugly. Even the grizzled-veteran-with-the-knife-fighting-scars fantasy is just a different kind of attractiveness.

That said, how we relate to our media is an interesting subject. The best article that I can recall was this one comparing four versions of The Office. It's not all about beauty, but that's part of it:

Re: Of course (Score: 5, Interesting)

I cannot agree with your assertion about racism, it would make the entire word meaningles. The word racism simply describes any statement or belief that different (human) races are different beyond color of skin. This gets ugly when this is taken so far as to say one race is superior/inferior to another because of these alleged differences.

When it comes to the character portraits, I agree with most of what you are saying, especially this part:

However, there's nothing particularly enlightened here - no one likes to fantasize about being ugly. Even the grizzled-veteran-with-the-knife-fighting-scars fantasy is just a different kind of attractiveness.

Personally I think they made the characters far too ugly and weird - they don't have to be pretty, young supermodels, but they certainly don't ALL need to be ugly either.

I think you're using the wrong word. It's not ugly so much as unattractive. Beauty is a part of that, but attractiveness is far more important, as if you're not attractive, you won't find a mate, and your genes will hit a dead end. Attractiveness is a much more complex beast, and involves things like fitness as a parent, which is why wealth makes a difference to women, and so on.

No, I'm pretty sure the KKK is intentionally racist. They *do* believe that their "race" is superior to others. We are not yet in a world where intentional racism doesn't exist. Its not a "bad joke" or "troll". Its the real, "these people are inferior to me because of their race" deal.

The KKK is certainly racist, but it's not racist to believe in racial superiority. It's only racist to be wrong about it. (To the extent that "race" is an actual thing.)

Let's try a little exercise: the Christian god, assuming it exists, is perfect in every way and is superior to you and your race. Is that a racist thing to say?

That comparison really doesn't work since any god wouldn't be the same species as man. Therefore the answer must be no.

Why would species matter? It's not as though "race" has any biological meaning. I think that's nitpicking - the point is bigotry, not whether bias falls within a particular category.

I think everyone understands that "race" in this context means different groups within the same species.

Re: Of course (Score: 3, Interesting)

Again, not the point. Does the example work better for you if I say Jesus instead of God then?

Besides, if you want to get pedantic then the Christian god isn't a separate species since it's capable of mating with a human and producing fertile offspring.

The world isn't as homogeneous as some people would like it to be. Men will look at things from a male perspective, no matter what you do to try and change it.

The developers also had a woman collegue but still ran into problems.

Yea, I think part of this is females feeling insecure when they see images of other females with idealized features. But that doesn't make a video game with lots of pretty girls sexist. It's just more for guys than for girls.

Re: Looking for prejudice everywhere (Score: 1)

Idealized for whom though?