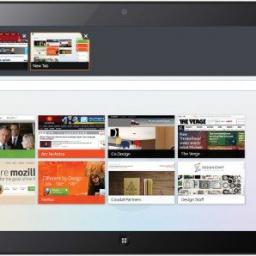 Mozilla says millions of users have downloaded pre-release builds of the desktop version of Firefox, while fewer than 1000 seem to be actively using the pre-release of Firefox for Windows 8 Metro. If you were holding out for the release version, time to look for other options!

I think Chrome has a metro interface. I've never seen it though.

fragmentation at its finest (Score: 3, Interesting)

Is between the different corporations who want to control the computing platform whether Microsoft, apple, Google, or any other player.

Application developers have to choose sometimes. Amazing to think that windows is what gets dropped in this choice. Changing times.

Re: fragmentation at its finest (Score: 5, Informative)

It is not the Windows version that is getting dropped. It is a specialised version that plays better with Metro.

Re: fragmentation at its finest (Score: 2)

Thank you for the clarification.

I think Mozilla made they right decision here. I have heard very few people happy with or actually using the Metro interface.

My favorite comment from the linked article:
Dear Microsoft,

Metro is bad and you should feel bad.

Sincerely,
Damn Near Everyone

Though that makes me wonder why they continue trying to push the Firefox OS. How many people are actually using that? I'm not saying it's bad or I dislike it, but I've never actually seen a device running Firefox OS in person.

Anyone here at |. running Firefox OS? What device do you have?

Re: Good for them (Score: 4, Informative)

I haven't used Firefox OS, but my understanding is it's aimed at lower end smart phones (modest hardware specifications) in emerging markets where there isn't already necessarily a heavily entrenched Apple/Google bias in phone sales. This page lists the devices with specifications and availability.