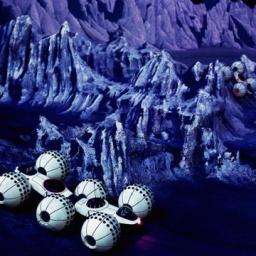 I don't know about current authors and predictions for the next 50 years, and I am very much looking forward to what others contribute to this conversation. When I've gone back and reread some Gibson novels years after I first read them, though, I've sometimes been surprised at how prophetic some aspects of them seem (he hardly qualifies as a utopian, mind you). The same is true of some Stross, though that's really likely more a case of catching an emerging trend and expanding on where it might logically progress.

Ok, people, hit me with a reading list. I need some horizons expanded.

Ray Kurzweil? I'd hate to think Howey Hugh's Wool Trilogy is our future, though we're probably capable of it. (Great series, Wool, by the way). Interesting that this guy is considered a futurist, when his vision of the future only seems to be a few product cycles away, so 4-5 years at best. Is no one thinking long-term anymore, or is there no profit in that these days?

I must've read some Kurzweil at some point, as we've got plenty of scifi laying around (I have no excuse for being so scifi illiterate/ignorant), though I cannot recall. I'll definitely try to track that series down.

Perhaps it's more difficult to recognize those long-term, far future predictions as they must, necessarily, be more removed from our current existence and therefor tend to be seen as "mere" fiction rather than as something potentially eventually achievable presented within a fictional framework. It's a lot easier to look like a prophet when predicting the near-possible almost-now. One doesn't have to wait as long, for a start.

Wow man - great looking book shelf, with what looks like lots of good stuff to read. Is that Asimov mag as good as it was reputed to be?

I confess the Asimov's are the Spousal Unit's. He's also an avid collector and reader of scifi anthologies (and has, in the past, taught a Science Fiction Literature course). He's a fan of the Asimov mags. Whether that means they're good, I can't say, but I do think he has better and more diverse taste in literature than I, so I'm inclined to think there's something in those Asimov mags worth reading.

Nothing special comes to my mind about contemporary writers at this moment, but in a general way, I would say any book that has an oppressive or totalitarian technological setting.

For anyone who has read several SF books, what has been going on these last years can be scary :
-- Megacorps like Google who buy companies in many different tech domains.
-- Flying drones (armed or monitoring) become widespread.
-- General spying by governments, together with megacorps. They even stopped denying or justifying.
-- Personal spying devices like Google glass for a start, but sooner or later, it could be implants.
-- Genetic manipulation, or at least selection, that slowly starts.
-- Medias: hard to say how they will evolve. Anyway, their interest seems to keep the people fed with the most easy and idiotic content in order to sell the most advertisement time to corporations.
-- Worst of all : most people gladly welcoming those devices and actions.

I must forget or fail to see a few other points, but if you add the next thing coming: Internet of Things, you have almost everything you need for any dark SF.

Asimov's essay nailed 2014 civilization's fascination with gadgetry and the frivolous uses of same, aided by incredible advances in communication bandwidth and technology. "There will be lots of robots around, but they won't be very good." Wow! He also predicted similar advances in mechanical engineering, but those have been slower than he anticipated, perhaps more because of economic and financial reasons than scientific/technological know-how.

He thought we'd have colonies on the moon by now; the fact that we don't is something the rest of us should regret, not Asimov.

I'm not a big science fiction fan but I did read some Asimov when I was in school. He wasn't the kind of literary writer you could stack up against the authors who publish stories in The New Yorker, but he was an excellent craftsman who wrote to inform, provoke, and entertain readers at the same time. And always with a friendly touch.

I'm also not a huge fan of Science fiction. But, I do make an exception for Asimov. The foundation series, was pretty darn good, imho. The Science didn't come first, the human characters' reactions to it did. Even the robots were humanized.

Although, come to think of it. I would agree that his short stories weren't that great. Certainly not as good as those in the New Yorker.

Huge Asimov fan here. I dug them all, starting with E.E. Doc Smith; through Clarke of course; Laumer; Lloyd Biggle; Heinlein was awesome; and so many others. But Asimov was da man. All that science fact writing as well as science fiction. I don't agree with the common opinion that Asimov's characters and their speech was stilted. I really enjoyed detective Lije Bailey's interplay with the robots he worked with. Extra-terrologist Wendell Urth was wonderful.

The Foundation series was absolutely unique. Nobody else even came close to that. The Robot series of short stories and novels were incredibly inventive and thoughtfyl. There were none better to me personally, in the New Yorker or anywhere else.