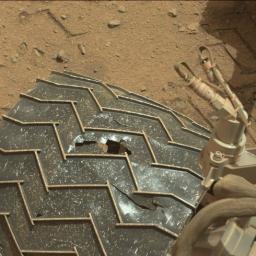 The Mars Curiosity rover has sustained serious damage to its wheels. Photos reveal the damage was more extensive than expected, which may cause NASA to reconsider the route to Curiosity's primary goal, Mount Sharp. Nonetheless, scientists are confident the mission can still be completed, but the mission may need revamping. It has meant taking a much closer look at the proposed route to Mount Sharp, and driving backwards to prevent the front wheels from failing.

Curiosity is now traversing a section of ground en route to its goal that is particularly dangerous as it is the same type of surface that has caused the majority of the wheel damage. Cross your fingers for Curiosity and pay close attention: it's going to be a wild ride!