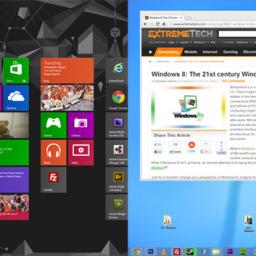 Windows Phone; Windows 7, 8, 9; Windows RT; Windows CE; and not to mention all the different variations of Windows boxed OSes (Pro, Basic, Home, and so on): there have been a lot of different products that bear the name Windows, and someone has probably decided it's time to simplify.

The idea would be that, in the mind of the consumer, Windows is just Windows, and that all of these different names and flavors are just confusing (â€œWhy is it called Windows Phone if it canâ€™t run my Windows programs?â€). Getting rid of all that complexity and returning to the old way â€” where Windows is synonymous with personal computing â€” would certainly be a coup for Microsoft. But just as it shot itself in the foot with Windows RT, consolidating on just â€œWindowsâ€ could be fiscal suicide if Microsoftâ€™s various operating systems donâ€™t indeed come together as one harmonious platform.

The folks at ExtremeTech have noticed a shift in nomenclature and marketing focus these days, as several products have simply discussed Windows, with no emphasis on anything other than that single word. The challenge here is that what marketing wants can't be delivered by the technical teams behind all those different versions of Windows operating systems, as they are not just different codebases, but extremely different code bases.

It's Too Early to Tell (Score: 3, Interesting)

Who knows what Microsoft is cooking up? I'm sure the plan is nebulous in all but a few of the Windows team leaders. One thing that has hurt Windows is that the world of computing has been changing faster than they can keep up. The original Windows fulfilled a serious need...providing a simple GUI was absolutely necessary in order to get a computer on everyone's desk in the office. Now, what is the need to be met? I believe, again, the interface is where the opportunity lies. Someone saw this as well, and that person or persons tried to think outside of the box when Metro was designed, but many of a computer's uses do not fit into the tile paradigm.

This sounds exactly like Ballmer Business as Usual -- all he knows how to do is brand things "Windows" and hope magic will happen. It's ALL he's managed to do for 30 years.

Of COURSE consumers think of "Windows" as one thing already; it's what's lead to all their troubles. They were a lot better off when WinCE really did run Windows programs.

Except ... Ballmer's gone. This is probably an effort to undo a lot of the mistakes made under Ballmer's watch, like the proliferation of incompatible versions of things with the name Windows splattered over the top, hoping name recognition makes up for crappy design, engineering, and functionality.

Nadella was handed a royal bag of shit, you have to admit. Consolidating the mess is a worthy endeavor but only if he can truly consolidate it from an engineering/code perspective instead of just relying on snappy marketing. Ballmer should be punished to wear a "Plays for Sure" t-shirt at every basketball game he attends, as punishment for the debacle that was seen in that marketing ploy. The t-shirt should be colored poop brown, like a Zune - another debacle. And on the back should be the words "I squirt," like the verb his team came up with for transferring pictures or music from one zune to another.

Good luck, Nadella. Remember, if you light the bag of poop on fire, you'll have to drop it when it burns your hands and then squish it out with your shoe to put out the flames.

That was really good. I suggest you swap that in as the summary for the article up top. :)

I'm guilty of NRTFA but I don't understand how one can call-everything-Windows and mean it without rewriting EVERYTHING that isn't i386 desktop and server. It just seems like something that is Not Going To Happen by definition. It's taken them over 20 years to keep rewriting Win 3.x and NT into something usable (and then breaking it again) so I don't really see how they're going to squeeze it down to these other platforms they've managed to screw up so badly. That's why I said it sounded like more-of-the-same Ballmer idiocy.