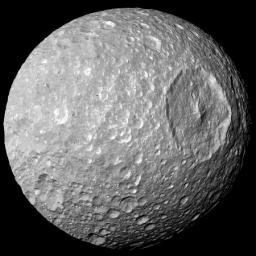 Mimas, one of Saturn's smaller satellites, may seem a little dull... An icy moon thatâ€™s just 246 miles wide and whose most distinctive feature is the 88-mile-wide Herschel crater â€“ a giant Cyclops-like indentation that makes the moon resemble the planet-obliterating superweapon from "Star Wars" that's known as the Death Star. But the moon may hold a special secret of its own. A stronger than expected rotational wobble points to one of two intriguing scenarios: Mimas either has an irregularly shaped core or has an ocean buried underneath its icy surface. â€œSomething else has to be going on inside.â€ The findings, described in the journal Science, shed new light on a mysterious but often-overlooked moon that could hold clues to its early formation.

Other scientists say itâ€™s unlikely Mimas has such an interesting interior and think the wobble can be explained more simply. One problem is that Mimasâ€™s ancient, heavily cratered surface shows no signs that water has ever touched itâ€”unlike, say, the freshly Zamboni-ed ice skating rink of Europa. That same result could be achieved with irregular gradations in the density of rock, ice, and pore space. The detected wobble could also have been knocked into existence by something that has nothing to do with the moonâ€™s interior: a comet impact.

Thank you. This news just made my day.
So little do we know...

I would guess that the wobbles more easily explainable by the satellite's low mass. Less mass would mean less force to press the core into a spherical shape.