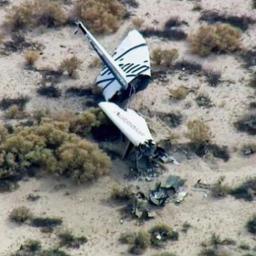 Virgin Galacticâ€™s SpaceShipTwo was destroyed during a powered test flight today in Mojave, CA. This was the fourth powered test flight of SpaceShipTwo. There were two pilots on board the craft. Local law enforcement agencies have confirmed that one of the pilots was killed during the accident and the other was able to parachute from the craft, but was injured and had to be flown to a nearby hospital.

This test flight was the first for a new kind of fuelâ€”a plastic similar to nylon. Previously, SpaceShipTwo had used a synthetic rubber fuel, one that had been giving engineers trouble for years as they tried to scale up the successful 3-seat SpaceShipOne prototype, which won the X Prize in 2004, to a much bigger vehicle using the same hybrid rocket design and fuel, and meant to carry tourists to suborbital space.

Weâ€™re left to wonder what impact the accident will have on the nascent commercial spaceflight industry, which Branson has been working hard to characterize as safe. Fridayâ€™s crash is a stark reminder that spaceflight is an inherently risky endeavor.

Not the first disaster for Scaled Composites (Score: 1)

Back in 2007, a Scaled Composites rocket engine test killed three people and injured three others:

Been a bad week for space flight (Score: 1)

Guess these kinds of growing pains are expected in an industry that's sort of remaking itself, but it's been a pretty tough week for fans and proponents of space travel.