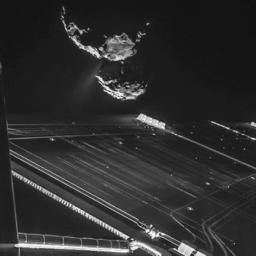 Have they published any pictures from the surface of the comet? I haven't been able to find any. The closest I've come to are photos during the lower stages of the descent.

The first images from the surface are being downlinked to Earth and should be available within a few hours of touchdown.

Thanks, guys. What an achievement that is! I remember watching the Halley encounter back in 1986, I still have it on video tape somewhere.

UPDATE: A magnetic sensor aboard Philae apparently recorded three separate landings, one each at 15:33, 17:26, and 17:33 UTC. That suggests the first bounce was nearly two hours long.

Given the lag in radio communications, I think that means that at the time the scientists were hugging and giving high-fives, Philae was actually airborn again - kind of neat to think about. Seems the comet has a very weak gravitational field and it's a non-negligible risk Philae could just drift off the surface again.

This is the coolest thing ever, and I'm stunned how little coverage it's getting in mainstream American media. This is for me like the moon landing for our generation.

Unfortunately Kardashian's butt is a much better headline than landing on a comet.

They should have said that the comet/asteroid was on the collision course with Earth and that Bruce Willis was on the lander to blow it up :-)

This is the coolest thing ever, and I'm stunned how little coverage it's getting in mainstream American media. This is for me like the moon landing for our generation.

I think you're overstating it. Voyager I leaving the solar system is far more interesting.

It's much harder to cover than typical NASA stories, since the ESA is doing this one, and not many news agencies have foreign reporters on the payroll who can head over and send-back footage, while all networks have local stations across the US to pull from.

And even more interesting, the first bounce was about 1km into space!!!
source: http://www.bbc.com/news/science-environment-30034060

Given that some conspiracy theorists insist to this day the moon landing never happened and was instead staged in a California laboratory, I think I'll get a headstart on this one and start insisting the entire voyage is a fiction, that there is no lander, no comet, and the whole thing is just a hoax by German scientists cooked up to conceal their secret underground Nazi laboratory where they have brought Hitler back to life ... help me out here, a good conspiracy theory has to be better than this, although I think a Nazi reference is fairly obligatory to these nutcases.

Oh, I've got it - it's a fake mission created because behind the real comet is actually a space ship full of aliens who are going to obliterate the earth, saving only those who prepared for the voyage by wearing white Nike sneakers and carrying a picture of Kim Kardashian in their left pocket ... help me out here, |.ers.

Eh, not enough Obama in that. Today's nut jobs need to have their fears about his skin color and middle name confirmed in really bizarre and obscene ways.

It also needs to be self contradictory like blaming big government, while suggesting that NASA should be funded by Giving everyone tax cuts to boost tax revenue. Oh, NASA also does atmosphere stuff, tie that in with global warming and hit the UN, and ebola. Don't forget HAARP and chemtrails. Those are vital components. What do comets have? Tails made out of chemicals which sound like chemtrails. They must be doing research on comet tails to figure out how they are able to control our fates through astrology! So you see the chemtrails of the future won't just control our minds and bodys, but they'll have the power of astrology to control our future!

Fear not, my come-chemtrail protective spray is now available! Guaranteed to keep you safe from the effects of body, mind and fate control of chemtrails --even the new comet based formula coming up. Get yours ... Today!

MultiLevel marketers rejoice! Share in the joy and the reward of saving our nation from its evil president! Call me today to work at home! All royalties paid in GOLD!

billshooterofbul: I tip my hat to you. That was really good stuff.

Nah man, you just spray diluted white vinegar at the sky to dissipate the chemicals!

It's also good for dealing with black spot on your rose bushes, too.

Sheeple! The US government is the worlds largest vinegar producer! You're vinegar has been GMO'd to cause autism!!

Jeez man, you are a pro!

Zaf was dead on about the conspiracy theorists coming out of the woodwork, but it seems everyone was going in the wrong direction...

We've got a probe up there alright, but it's not examining the composition of a comet... No, it's secretly making contact with an alien race.

Awright - that would explain why Philea is no longer transmitting any images or data! It has discovered the master race and been taken up into the mother ship where it has achieved full consciousness and is now plotting the immediate destruction of the human race.

Can someone tell me how homo sapiens became the species at the top of the food chain? Must be opposable thumbs, not our intellect, because we are capable of believing some extraordinary horse sh*t, that's for sure.

Wow, just visited that article. It's a beaut.

He said he had received an email from an anonymous Esa 'whistle blower' that claimed intelligent-sounding signals had been received from comet 67PChuryumov-Gerasimenko 20 years ago and the object is actually an alien ship in disguise. The email said: 'Do not think for one moment that a space agency would suddenly decide to spend billions of dollars to build and send a spacecraft on a 12-year journey to simply take some close-up images of a randomly-picked-out comet floating in space.

The whistle blower, who insisted on remaining anonymous for fear of reprisals, insisted the comet 'is only being disguised as such' and appears able to change trajectory at will. The letter added: 'As for who is disguising it and why I cannot answer; all I can tell you is that whatever this thing is, it does show signs on its outside of machine-like parts and unnatural terrain. 'Whatever this object is it did not ask to be found or scrutinised, and it appears for good reason.' Other theorists spoke of 'alien structures' in images of the comet, in particular a bright white 'metallic' disc on or hovering above the 2.5 mile (4km) wide lump of ice and dust, and a sculpted non-human face.