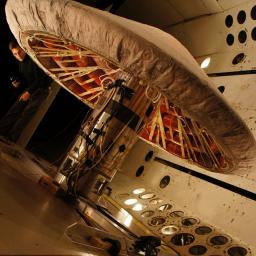 How do you get humans to Mars? Apparently in a giant mushroom.

NASA engineers believe a lightweight, inflatable heat shield is necessary to sufficiently slow a craft entering a Martian atmosphere, which is much thinner than Earth's. Filled with nitrogen and covered with a thermal blanket, once deployed for landing the spacecraft resembles a giant mushroom. New technology is needed because the type of spacecraft that would land humans on the red planet would be much larger than anything that has landed on the planet previously. NASA engineers have been working on the inflatable technology for about a decade, and believe it is close to being ready for operational use. A test of re-entry into Earth's atmosphere is scheduled for 2016

Back in 2007, NASA engineers gave an in-depth explanation of the non-obvious difficulties with landing heavy payloads on the surface of Mars. Rockets alone can't be used to land a large craft on Mars, as on the Moon, due to higher gravity. Parachutes also will not work sufficiently in Mars' thin atmosphere for the heavy spacecraft needed to deliver humans to the planet.

Mario would be so proud

Of course you can use rockets (Score: 0)

Rockets are fine for landing in Mars gravity. They work for landing in Earth gravity too. The problem is that it's really expensive to send enough rocket fuel to Mars to land with rockets.

Re: Of course you can use rockets (Score: 1)

Rockets are fine for landing in Mars gravity.

The rocket scientist being interviewed, strongly disagrees with your assessment...

e.g. "would likely destroy the vehicle."