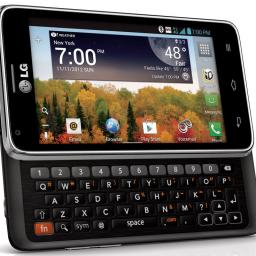 Isn't it strange how all the high-end smartphones with keyboards have disappeared? There isn't a desirable smartphone with a keyboard on the horizon. The original Motorola Droid was the phone that started the Android phenomenon, yet the Droid 5 never materialized.

For years, buying a smartphone with a keyboard has meant settling for less than the latest and greatest technology on the market. There hasn't been a top-tier smartphone with keyboard since the Samsung Epic 4G set the bar in August, 2010. The carriers treat sliders as messaging phones for teens rather than tools of pros, and adjusted their asks and advertising respectively. Thereâ€™s also the myth that thereâ€™s an Android phone out there for everyone. The differences in Android phones were huge. Slide-out keyboard, small screen, large screen, slim or bulky. Now it seems like phones are all merging into the same basic design principle; slim with a huge screen, leaving a market gap that any competitor could jump into, much the way Android did when the one-size-fits-all iPhone dominated.

When Android came along and smartphones began to take off, handsets with keyboards did very well for Sprint. The Samsung Moment, the EVO Shift, the Epic 4G: "We sold multimillions of those," said Kaufman. When Sprint asked customers whether they'd buy a physical keyboard the next time around â€” not so long ago â€” 75 percent of existing QWERTY users said they would. "We went out and built the LG Mach and the Photon Q. It was a big party and nobody came." So much for surveys. "Half of your customers buy the iPhone [...] boom, take them out of the equation." In addition, "the market has moved to everyone buying iconic phones... people see the advertising, they walk in, they want to buy a Galaxy S III."

You might be thinking a slide-out keyboard is old technology, but there are advantages. People can type much faster and error-free on hardware keyboards. Being able to see everything on screen is a huge plus, and playing games is infinitely more enjoyable with tactile, mechanical buttons.

As a devout user of physical QWERTY keyboards, I'm pretty sure I'm screwed.

LG seems to be the last manufacturer keeping the torch burning, but they have their problems... They have a bad habit of not offering the option of auto-adjusting screen brightness on many of their phones, even high-end and feature-packed ones like the afore-mentioned LG Mach (LS860).

The drought of sliders has led to some very strange pricing. If you have an old but good-condition slider phone, it'll fetch $100+ today. The 3 year-old Motorola Photon Q (arguably, the missing Droid 5) running Android 4.1 is going for $300+ New on Amazon. Even the ancient used Droid 4 is selling for $120.

There seems some faint hope in the form of phone cases with built-in slide-out bluetooth QWERTY keyboards, but they really only exist for iPhone and Samsung Galaxy phones. The reviews for them are really TERRIBLE, and the separate battery must be quite a hassle to keep charged.

I still have my Nokia N900 slider! Maybe I could ebay it! (although the battery has long since died and would need to be replaced) The Debian GNU/Linux Maemo distro with a GTK+ DE predated both Apple iOS and Android by many many years.

But as a user of a sliding keyboard phone, I was always petrified that I would break it. So many moving parts made of tiny plastic pieces - I'm sure if I would have dropped the phone1, it would have exploded into hundreds of tiny shards.

1 I did install the app "N900 Fly" that used the accelerometer to measure how far up in the air you could hurl the phone. Alas, my personal score was not able to place in the top scores list.

have a look at neo900.0rg. they plan to refurbish n900 with new motherboard and internals allowing one to run any OS they like...

The battery is $5 on eBay and Amazon. It's the same battery used in the Lumia 521, so they are plentiful.

I really wish I'd kept my N900. I sold it for twice what I paid for it, but in the end I would have been better off keeping the phone.

I have nothing to add to the original post except to agree with all of it. I went from a Moment to an Epic to a Photon Q where I am currently parked until someone decides to revive the slider platform. At least Cyanogen is still creating images for the Photon Q so I can stay relatively current as far as the OS goes.

My wife has a Photon Q and so far we've been unable to get any custom ROM to run on it. We can unlock the bootloader with Motorola's permission (which I think is a load of horseshit, having to get permission from the manufacturer to fully utilize the hardware, but that's a rant for another post). We can flash a custom recovery, and we can flash a custom ROM. Then it gets stuck in a boot loop, no matter the recovery or ROM used. So, she's back on the aging and soon to be unsupported 4.1.

We've searched high and low for a suitable Qwerty replacement for the inevitable day her phone is no longer usable, and there just isn't anything out there on any carrier. If she didn't need Android for playing Ingress, she would probably go back to a Qwerty feature phone, since she doesn't care as much about which OS she has but more about the ability to text without having to touch the screen.

This is where I am getting my roms: http://download.cyanogenmod.org/?device=xt897. I do know I had to go through several different custom recovery choices and versions before I found one that worked correctly. I encourage you to keep trying because you should be able to load 4.4 or better: http://www.techaudible.net/cyanogenmod-11-for-motorola-photon-q/

We've searched high and low for a suitable Qwerty replacement for the inevitable day her phone is no longer usable, and there just isn't anything out there on any carrier.

First link in the summary mentions the LG D520 (Optimus F3Q). It's nearly a year-old now (but still much newer than the Photon Q) and available on T-Mobile. Might not be ideal, but at least there's still an option.

That phone may be technically "newer" than the Photon Q, but it's a huge step backwards, not an upgrade. Much lower specs all around, and it's on JB 4.1 despite being released after Kitkat went mainstream. That's inexcusable, and only a consideration in an emergency.

Thank you for bringing it up though!

So get a BlackBerry Passport. Higher resolution than most Android phones, ability to run Android apps, and the most progressive physical keyboard ever put on a phone (with touch-sensitive gestures). Amazing build quality. Stop complaining and put your money where your mouth is. Stop rewarding companies for the same old crap.

They keyboard is very awkward on the phone for me. To use the keyboard comfortably for my thumbs, I have to have the phone on the verge of falling out of my hands.

Indeed, this is why my wife prefers a slider to a fixed keyboard, she finds the fixed keyboard makes Blackberry and similar phones difficult to hold. She tried a Motorola Admiral when we were looking for her first smartphone, and it kept slipping out of her hands when she'd type.

Oh come on. The Passport's keyboard isn't any wider than a landscape slider.

I wasn't talking about the Passport specifically, I was talking about classic Blackberry style phones in general (as in the Motorola Admiral I mentioned). And who the fuck are you to tell me what my wife prefers anyway?

It looks like the solution is the bluetooth keyboard.

I couldn't believe how long it took someone to figure out that having a keyboard was a waste of space/weight/parts/etc. So I never missed 'em.

But it looks like you can add one to any phone in existence...

If somebody made one that clipped solidly and unobtrusively onto my phone, and also charged its own battery from the phone, they'd probably be quite useful, and I'd be happy to try one. Since they don't do any of that, they're an extra piece of hardware that is a lot of extra hassle, so it just gets left at home, rendering it useless.

I mentioned phone cases with bluetooth keyboards, in my earlier comment... The upshot is, they aren't available for most phones, and reviews for them range from awful to horrible.

Maybe it's because they are considered obsolete? I didn't upgrade my original Droid until very recently (when it finally died) and I lamented the loss the of the slide-out keyboard. I was extremely happy with both a) how far predictive text input technologies had come, and b) swype. I can type much faster with one thumb and swype than I ever could with two thumbs (and I'd had years of practice with various Palm Treos beforehand). The magic technologies aren't without their problems, and now I'm much more likely to "type" a completely different word than what I intended rather than just missing a character here or there. For the reader of my messaging, it is a step backwards. For me, it is a step forwards.

The summary gives several good examples of where Swype simply does not work, including a photo link.

I never liked them. Keys too small. True about the not taking up half the screen. I would rather have a slide out d-pad style game pad and a decent snes emulator. Games over 2 decades old for less than $15 to play on my phone would also be good (jab at nintendo for selling very old games for excessive prices there)

just another vector for a possibility of failing.

That is how I feel about touchscreens.

give me a clamshell device please (Score: 1)

I used to be a big fan of the physical keyboard, certainly when I'm in hunt-and-peck mode on my Android (Note 3). But I felt less rabid about the subject when I installed Swype. Swype and its competitors do a great job of helping you get words entered in an efficient and generally painless manner. I don't miss the hardware keyboard so much anymore.

That said, when I have to do some really serious typing, I saddle up a Bluetooth keyboard before getting started. Touchscreen keyboards are only good up to a limit, I think.

I'd be happy for a double screen though, so the on-screen keyboard didn't obscure so much of what I was looking at while typing (not so much a problem on the Note 3 but a bit worse on smaller devices). I'd also love that double screen to fold like those awesome old clamshell phones where all the delicate bits were protected on the inside in your pocket. Tired of having to worry about screen scratches, or worse, taking a lovely, sleek device and armoring it with the non-sleek options out there that are really required to prevent your device from taking a beating.

Re: give me a clamshell device please (Score: 0)

"But I felt less rabid about the subject when I installed Swype. Swype and its competitors do a great job of helping you get words entered in an efficient and generally painless manner."

About ten years ago, we called these programs keyloggers.