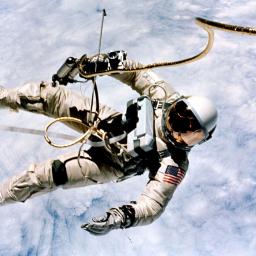 "Without the path first blazed by Ed White â€” and before him, Russian cosmonaut Alexei Leonov â€” our current platform in space would not be possible," Pearlman said. Spacesuits and spacewalking methods have also evolved since White's spacewalk in 1965. "When astronauts someday walk on the surface of Mars, they will do so in part because of the journey begun by Gemini 4 and the 20-minute spacewalk performed by Ed White 50 years ago," he said. White died tragically in the Apollo 1 fire in 1967, along with two other astronauts. You can watch a 30-minute documentary about the history of spacewalks called Suit Up from NASA now.

In 50 years we have not gone that far. Not even to sending manned missions to Mars. Only recently did we start reaching for the stars again. This planet is our only egg basket

frankly i'm glad we have not sent a manned mission to mars because the people that went would have died on the way from radiation. believe it or not, we have learned a lot in the last 50 years by sending our technology instead of people with tools. sure we could have pushed harder but the world is littered with humans that become distractions. in the mean time our technology has improved an absurd amount and humans are still noisy distractions but we becoming more forward thinking even as some drag their feet or kick and scream.

we will get there eventually but what's more important than going is making a way to stay there permanently. this means we need to up our genetic engineering game so that we can make some plants grow on mars after we melt mars' polar cap of dry ice using machines.

in short, it's one thing to throw a corpse onto the surface of another planet, it's another thing to make a second world.

We have one fifth of the worlds population to spare. The only question is how to ship them there. I wonder if there are millions of virgins on Mars..

As long as I get to choose which fifth.

I vote for it to be anyone who is an admitted liar belonging to a group who have declared perpetual war against the rest of humanity. The up side is that after throwing a few million of them to Mars the planet may be more suitable for human life. The down side is that those living there will be the scum of the Earth.