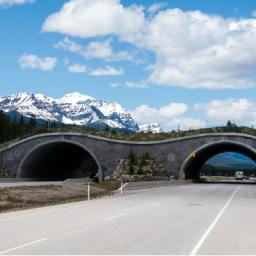 This week will mark a first for Washington, as the state breaks ground in construction for their inaugural animal overpass. Interstate 90 in the Northwest cuts through the forests and mountains of the region, having long proved dangerous and fatal for wildlife. Now, the Department of Transportation will begin building a 150 foot-long structure freeway overpass designed specifically for all animals to endure safe passage, set to open in 2019.

While this is the first overpass, four underpasses are already open, and cameras have documented the transit of deer, coyotes, and otters, among others. It is presumed that all animals will look to the overpass, including black bears, cougars, and elk â€“ though perhaps not at the same time. Two more overpasses are in the plans and perhaps more if there is enough money. Such structures have proven successful elsewhere, as more than 20,000 crossings a year from 30 species has been documented in Montana. Banff National Park in Canada has an extensive working of animal crossings, as seen above.

they are smart (Score: 2, Interesting)

i wonder how fast it will take predators to realize they can just wait at either end for their pray to come to them? and in the long term could that result in certain species being too afraid to cross, effectively trapped on one side?

I mean, aside from the usual "why is this on Pipedot, it's not tech" comment, this still barely is worthy of being called news, at least on a national (or international) interest level.

Animal overpasses aren't a new idea. They have been in use for years. Most of the time the crossings are tunnels built beneath the roads but bridges over roads for the larger animals (especially big herd animals that might get spooked by the noise and constriction of a tunnel) have been built for decades. The only "new" thing about this is that it is apparently the first such structure being built in the state of Washington.

This is a non-story.

All your complaints about this story are already IN THE SUMMARY.

If non-tech stories anger you, you'll have to ignore everything in the science, environment, anime, categories. This was even up-voted by readers while in the pipe, no down-votes, and there sure weren't any tech stories that got passed-over for it, anyhow.

As long as nearly all stories are submitted by me, it's going to be science/tech I find interesting... Even at that, |. still has a far narrower focus than any other sites. If you want more tech, then submit a tech story every few days...

Agreed. Canberra, as a city, is a "green corridor" for the local wildlife. Slamming into a roo at 80kmph on the freeway is normal. Dodging around the corpses too. Cyclists being wiped out and nearly killed by roos crossing through is new, or at least now this is being reported as news. This is sciency! The more animals that make themselves Darwin Awards For Animals contenders the better! Perhaps one day they will be smart enough to talk.

As I said, I wasn't really making a "this isn't tech, shouldn't be on Pipedot" argument; I was making a "this isn't news, it shouldn't be on Pipedot" argument. It is a non-story because there is nothing new about it. It is about as exciting as learning that my hometown as built its first local sewage treatment plant (even though, yes, sewage treatment does requires some knowledge of science!). Animal overpasses are in no way a new development and these do not advance the art in any way. It's nice that they are doing it - truckers and deer will be thrilled, I'm sure - but it's also nice that my hometown is less likely to be pouring raw sewage into the waterways. It still doesn't make it newsworthy. It is extremely local and barely even worth mentioning for the residents.

i voted it up in the pipe because it was something different, and it fit roughly in the environment category - and while maybe not technical, i figured it could start a discussion (point of this site), whether it be about the interesting design of the crossing (pretty low fence), or animal migration patterns; the latter being what interests me most.

where i am northeast, i don't ever see such structures; but ive heard of areas near me where the highways have trapped certain species in a relatively confined area, and the population is booming - sounds good, but not when its 50 coyotes backed against a neighborhood :)

You shouldn't worry about him. There are always malcontents who will complain about anything and everything, as if they're being personally harmed by something they can easily skip over.

As far as news value: First in Washington with plans to build several more is notable, something that most people probably haven't heard about, not to mention it's news just because it hasn't been covered by pipedot before.

File it under Games? https://en.m.wikipedia.org/wiki/Animal_Crossing