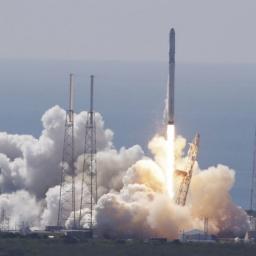 SpaceX's perfect launch record came to an end, today, as an unmanned cargo ship destined for the International Space Station exploded minutes after launching from the Cape Canaveral Air Force Station in Florida on Sunday morning. The 208-foot-tall (63-meter) rocket was the company's 19th Falcon 9 launch since its 2010 debut, including six previous cargo runs for NASA under a 15-flight contract worth more than $2 billion.

The spacecraft carried 2,477kg of food, clothing, equipment and science experiments for the station. The gear included the first of two docking systems for space taxis under development by SpaceX and Boeing to park at the station. NASA hopes to turn over crew transportation to the US companies before the end of 2017, breaking Russia's monopoly. The crew on the International Space Station has about four months of food and supplies on board, so the accident does not pose an immediate problem for them. However, NASA's second cargo transporter, run by Orbital ATK , remains grounded following a launch accident in October. In April, a Russian Progress cargo ship also failed to reach the station.

Wow, everything looked fine until it didn't. Announcer even said "vehicle on course, on track" a second before it went poof and disappeared.

Looked like an upper stage fired early. I hope they were insured.

I just started reading Neal Stephenson's Seven Eves so this is news that resonates with me. As I am reading Seven Eves I find myself *really* wanting to hear about space exploration successes instead of failures.