Google just announced Project Fi, its new MVNO wireless service for the Nexus 6. Google hopes to shake up the industry with its control of the hardware, software, and network. It's sort of the Google Fiber approach: move into a market with a new pricing scheme and new technology and hope the pressure of competition makes the internet better for everyone. 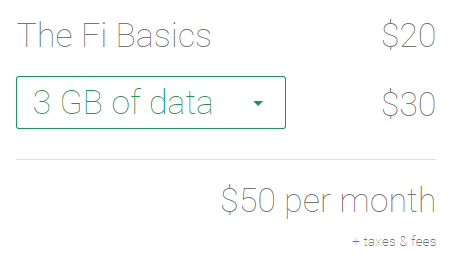 Google Fi combines Sprint, T-Mobile, and Wi-Fi into a single network. This isn't Sprint or T-Mobile; it's Sprint and T-Mobile. Your phone is subscribed to both networks and jumps between them, which means the Nexus 6 will be hopping from Wi-Fi to CDMA to GSM to LTE as the situation dictates. Calls, texts, and data can seamlessly switch between T-Mo, Sprint, and Wi-Fi, and calls and texts can be routed to any secondary devices that have Hangouts installed. You're allowed to tether, and your data plans work in over 120 countries, but only at 3G speeds.

Google says they have "millions" of high-speed Wi-Fi hotspots across the country, and your connection to them is encrypted. The biggest downside is device selection: for now it only works on the Nexus 6.