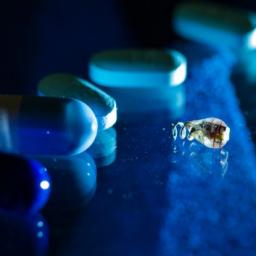 The old joke is that there's no need to study biology since eventually it's all just chemistry anyway. But maybe behind the chemistry it's actually all just electrical? If that's the case, I'd like a USB port wired in, please.

but I am too depresser to so so

And you might want to stay away from the alcohol.

It occurs to me this would be a pretty good plot/subject for a science fiction movie - some kind of obligatorily-worn mood changer. The risk of abuse is obvious too: imagine a totalitarian society that has dealt with the problem of pedophilia/etc by making anyone convicted of it wear the helmet that dulls that urge by electrically stimulating some nerve center in the brain. What would those helmet wearers do? What would that say about society? Repeat for other crimes - thought crime, etc.

That's a great story; I think I'll write it.

While the thought of totalitarian society is scary and deplorable, some people who do terrible things compulsively actually realize they are terrible things, don't want to do said things, but can't fight the urge. They may welcome a device which helps them alleviate the desire to commit those acts. IF these things were developed and used without abuse, they might not be so bad.

Fair enough - wearing the helmet can be part of your fight to remain in society - voluntary helmet wearers.

Could it be used to treat OCD, I wonder.

That's not Sci-Fi, it has been standard operating procedure for the past half-century. Convicted rapists in many situations (depending on jurisdiction) have been required to take pills or injections that reduce sexual urges, as a condition of their parole for many years. It has been happening in the US since 1966, and is law in several states. In Europe, Alan Turing chose that punishment for his homosexuality, rather than jail time, back in 1952:

I'm aware of the pills and chemical castration and the like. But having to submit to some sort of device that modifies your brainwaves/urges on behalf of the State? That's just pure evil.

How evil is it compared to more people being raped? Or cutting off the.penis? Or imprisonment? Or... what?

I would be very careful about that line of thinking... The current, ever-expanding definition of the term "sex offender" should be all the cautionary tale you would need.

Remember, if a woman regrets having sex with you, even a week later, the feminazis want you punished like any other rapist. THAT'S NOT AN EXAGGERATION. That has been instituted on several college campuses recently, and that's how we get so many mainstream news stories claiming women have a 1 in 4 chance of being raped, when the actual number is around 8%.

With current laws so completely ridiculous one-sided and extremely heavy-handed, I have no faith at all that newer technology would be used properly. Instead, you could end up with the entire male population forced to get such implants.