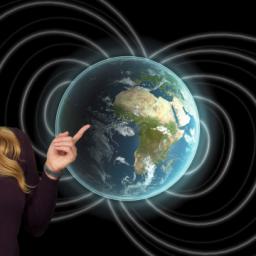 How strong will power grids be affected? (Score: 1)

This does not sound good. I saw once a documentation what might happen when a huge EMP destroys the infrastructure of the modern western world. In the documentation one possible source of such an EMP was an extra-terrestrial gamma-ray burst. So compared to such an event, how does the effects measure to the weakening magnetic field? Might be that such a polarity change never before caused a serious catastrophe. Before the mid-20th century it most likely would not have been much of a problem either. However, the predicted gamma-ray burst EMP scenarios for today's tech/power dependencies came quite close to an extinction level event for humans.

Re: How strong will power grids be affected? (Score: 1)

Probably not extinction, but It wouldn't be good. If a good chunk of our modern electrical grid/ telecom infrastructure was destroyed some deaths would occur. Its really tough to predict how many. The increase in radiation would also likely spike cancer rates, leading to more deaths. But probably not mass die offs of the human race.

Re: How strong will power grids be affected? (Score: 0)

Not directly, but looting and riots would be likely. Fires in urban areas would be very dangerous. And medical care would be reduced to some pretty poor levels.

Wait.. isn't this just that Planet X conspiracy theory all over again?

Hadn't heard that one (Where's Robert Stack when you need him?). "Planet X" typically refers to Pluto and other dwarf-planets.

According to Wikipedia, the conspiracy theory involves the Earth PHYSICALLY flipping up-side-down, nothing to do with magnetic poles:

"(a physical pole shift, with the Earth's pole physically moving, rather than a geomagnetic reversal)"

Fortunately, this was predicted to happen in 2003, so those Zetas have quite the skill for causing cataclysms that nobody notices. I certainly didn't know I was upside-down.

Yeah, Wow. I hadn't heard of that conspiracy before. Their website is still being updated, with new newsletters. I looked at the most recent one. Nothing appears to be immediate. There are a lot of fears of other groups that know what they know and are plotting to destroy them once the big pole shift happens. Maybe they should try not posting what they know about the pole flip, to keep a step a head of the others. It takes a special kind of delusion to keep it up this long after so many missed predictions.