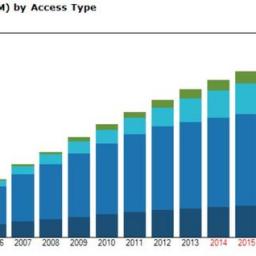 To meet its full gigabit-per-second potential, G.fast connections will require broadband providers to use network equipment close to the customers' buildings -- 50 meters (about 160 feet) or less. A 200-meter distance will still be good enough for about 600Mbps. That's why broadband providers have been placing their network gear closer to homes -- often in boxes under sidewalks, in cabinets by roads, or boxes attached to telephone poles. That's also why it's so expensive to upgrade broadband networks: the ISPs have had to extend their networks to bring that network gear closer to their customers.

Hard to see how this will shake out in the US: higher bandwidth internet connections threaten the cable providers, and the ISP oligopoly - who are frequently cable companies too - seem more bent these days on protecting their vested oligopolic interests than in investing in new infrastructure or improving the quality of service.

I'm not hopeful that reason will prevail in the United States where better internet infrastructure is concerned. Sure would like a nice, zippy connection though. Maybe I should move to S. Korea.

Should be a good fit for AT&T's U-Verse service. They've been responsible for the proliferation of network cabinets (VRADs) through neighborhoods they serve for many years... Though not remotely enough to put everyone 50m from a DSLAM.

CenturyLink is probably in the same boat. They're deploying fiber, but they might take the DSL upgrade path for their (many more) already-deployed DSL areas.

Verizon has gone the other way entirely, deploying FIOS instead of improving DSL, and trying to make POTS and DSL impossible to sign-up for, anywhere FIOS is available.

We don't need copper networks. Fibre is the way of the future. Fibre to the house errr node errr exchange for the win for Australia!

Sorry, I don't care what you think you can do with copper. From unbonded grounds, to lighting, to interference..It's absolutely, unquestionably inferior to fiber.

Analogy: JavaScript. It was never intended for what it's used for today, and it was pretty bad even for its humble original goals, but we're stuck with it forever. The best we can hope for it to evolve it well.

Similarly, neither the English language nor QWERTY are efficient choices, but here we are. They'll continue to be used tomorrow, because they're so widespread today.