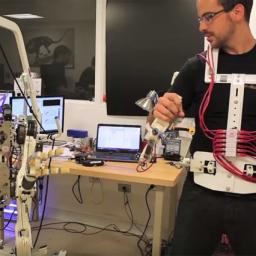 Advances in robotics are entering a new phase of complexity, including in the essential balance feedback response area of research, which is essential to mobility. Check out HERMES, as just one example:

The researchers worked with HERMES, a 100-pound biped robot designed by the MIT team, along with the interface, for disaster response. They envision deploying HERMES to a disaster site, where the robot would explore the area, guided by a human operator from a remote location. The researchers will present a paper on the interface at the IEEE/RSJ International Conference on Intelligent Robots and Systems in September. MITâ€˜s two-legged robot is wreaking controlled havoc: punching through drywall, smashing soda cans, kicking over trash buckets, and karate-chopping boards in half. The robots actions, however, are not its own. Just a few feet away, PhD student Joao Ramos stands on a platform, wearing an exoskeleton of wires and motors.

Ed note: I propose building two of these things, and then having the two researchers/controllers fight it out.

Questions which present themselves (Score: 1)

This sounds like a remote Waldo, not a robot. Robots are autonomous. Of course that doesn't make it useless by any means.

I was unable to get any traction at all on meaningful parameters.

* How noisy is this thing compared to a human?

* What is the unrefueled/unrecharged endurance doing typical tasks? Again, compare to a human.

* How is the thing refueled or recharged, how much does it cost to do so, and how long does it take? Does it need to be returned to a base station to do it? Compare to a sandwich and a pint of beer for a human. I imagine, however, that it does not have to eliminate waste products at intervals like a human.