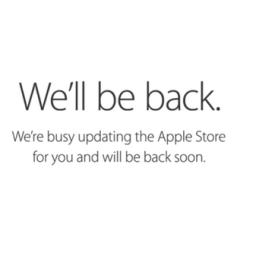 Yup, it's just the predicted (and somewhat delayed) result of Jobs' death. Without that dictatorial, determined, and tasteful driver/asshole, they've become another mediocre technology company, just as they were headed under Sculley.

As we discussed yesterday, from Forbes, "According to CNBC, Peter Garnry, head of equity strategy at Saxo Bank, called the event â€œthe night Apple became average.â€

Noted tech pundit Zafiro17 concluded "For Apple, that's about the most damning comment they could receive. Being average means they have failed, the 'reality distortion reactor' has stopped spinning, and Apple products are just one of the bunch. What could be worse?"

When your "one more thing" is a widely anticipated watch that underdelivers in EVERY possible way from even the basest expectations and most childish mockups, you've begun to simply suck.

On the one hand, it's nice to see their bizarre ascendancy stall, and on the other hand it's a bit scary going back to a wild west of crappy directionless products from every manufacturer including Apple. The winner in this, of course, is the Googles, who have the uniform platform that underpromises and for the most part overdelivers through the miracle of greed and competition from multiple manufacturers, some of whom are even innovative. (I say this as a libby liberal.)

Also, I saw some of those Samsung ads, and they really stink. Not even remotely funny. (And if anyone has a right to crow it's Motorola, not Samsung.)

The ad is also somewhat in bad taste. I'm not a fan of attack ads, even when they are successfully funny ("I'm a Mac, I'm a PC" was somewhat entertaining). Not a cool move, Sammy.

Jobs would never have allowed a protruding camera bezel that makes the entire phone wobble when placed flat on a desk.

Was that dedicated case that turns an iPhone into the French "non" before or after Jobs?

I think it was an early indication of the sloppiness and inattention to detail that marks the Tim "SUPPLY CHAIN" Cook era.

Oh damn Bryan, I thought you were talking hypothetically or something. You're right, Jobs would have slapped the crap out of his team for this nonsense.

I still don't have a smart phone. Don't plan on getting one either. Want to see how many more years I can wait..

In the company where I was previously working, we were only 2 guys without a smartphone. The funny point is that we were also the only 2 guys in charge of electronic design / low level programing with smartphone/tablet SoCs :-) We had absolutely no interest in such devices.
Fortuitously, we also happened to have the exact same model of basic Nokia dumbphone :-)

Yeah same here. For me, it's not a problem of waiting but finding a normal phone. I used to have a clam-shell phone which broke 3 months ago. It's impossible to get a decent one where I live so I have to deal with a stupid ass key locking, screen scratching, humongous bar type phone.

So glad that Jobs is dead and I hope his ilk doesn't crop up again in my life time. So happy that Apple is losing ground. I have enough hippies around even without Apple encouraging it.

Seriously embarrassing. Heads should roll.So... They think there is a market for a watch. Interesting.Nobody cares.Yeah, you could.What an apt description. Because perfume is so unpopular.As usual, Apple isn't doing anything new. They're just doing it well. And taking a slice of the pie while they're at it.

> So... They think there is a market for a watch. Interesting.

The market for a watch exists, yes.

Going running with a 5" smart phone is quite annoying. Having an unobtrusive watch which does GPS, timing and logging, pulse monitoring, SMS, NFC for small purchases, music, etc. which is fully interoperable with the rest of your mobile devices will be a big thing for a lot of people.

Lots and lots of young people go out running or cycling and have the disposable cash. I know a number of non-geeks who want one of these watches badly.

Going running with a 5" smart phone is quite annoying.

Let us make it shorter. Going running [...] is quite annoying.

This is where your iPod comes in...

Yeah, that's the thing - I'm not sure how many of those things the watch is gonna do without the phone in proximity.

Perhaps they made the watch smart enough to continue running without the phone present ..

Now I am wondering how this compares to the Pebble. From CNET:

The Good: The Pebble Watch is waterproof, runs a ton of apps, and works with both iOS and Android phones. A new app store improves the whole experience.
The Bad: A lack of touch screen and multitasking limits the capability of apps; scratch-prone polycarbonate design doesn't feel nearly as impressive as the Pebble Steel.
The Bottom Line: With a major software update and new app store, the original Pebble gets a new lease on life -- a less stylish but arguably better value than the newer Steel.

Some info on the apple watch:

This makes the applephone look like a terrible deal - it doesn't do much, requires a huge investment (new phone plus watch) and requires the phone to mostly be in your pocket anyway, so what's the point?

My magic combo is still:
regular old stupid wristwatch
fatty smartphone in the pocket when I need it
ipod nano for music while I walk the dog

No convergence for me!

But, but, don't you want the magic of paying for your morning coffee by scraping your $500 watch repeatedly against a filthy sensor next to the register at 7-11?

(How do you get the earbuds to stay in the dog's ears? I assume the nano clips to the collar.)

Good point about the filthy sensor - hadn't even thought of that. Yuk. (good one about the dog).

I haven't worn a watch since I was a builders labourer and kept busting them off on door frames. ended up using an elastic watchstrap until I got a mobile phone
My magic combo

it has clock, phone, camera and music player, why use anything else?