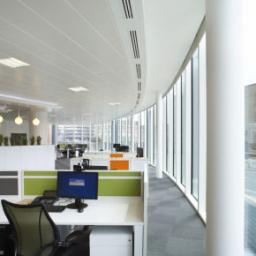 Management will not listen while everyone suffers (Score: 4, Insightful)

I have worked in a few open offices and visited many. They can range from very bad to sort of okay. If designed correctly with teams organised to compliment each other it can be quite good. This never happens, or is ripped apart within a few years.

Paranoia is rife. You hear everyone talking. Everyone can see everyone else's monitors which tends to end up that you watch someone across the floor surf the net all day. All it takes is for one exhibitionist, loud mouth, megaphone personality or uncontrolled cackler and your work becomes. punctuated. by. sound. which. is. really. annoying. Nothing can be said which hasn't been said before. It sucks.

If you have never experienced an open plan office then be thankful and do what you can to avoid them.

Re: Management will not listen while everyone suffers (Score: 3, Interesting)

All it takes is for one exhibitionist, loud mouth, megaphone personality

In a previous company, they had this brilliant idea of putting marketing guys right next to the developers and they never shut up all day, either on phone or "quick team meetings" etc. I had to go to the sub-zero server room to get anything done.

Open plan sucks bad. It's now one of my main criteria when assesing a job offer.

Re: Management will not listen while everyone suffers (Score: 2, Informative)

I can top that. In one company one of the 'nicer' colleagues really thought it ok to smoke in an open office. The boss did not care, he was a very heavy smoker himself. It was the only time when I left a project before its time.

Re: Management will not listen while everyone suffers (Score: 0)

Perhaps he was tired of getting shit for being considerate and going outside. A lot of people make comments about taking many breaks, etc.

Re: Management will not listen while everyone suffers (Score: 1, Insightful)

At one place my desk was in the middle of the office, so the bay had a lane on either side, with finance people on one side and helpdesk teams on the other. OMFG. Finance people _talk_, laugh, hold mini meetings, then for 2 months work their asses off running around stressed as hell. Think of working next to bipoar monkeys. The helpdesk people need space. Away from devs.

Re: Management will not listen while everyone suffers (Score: 1, Interesting)

"Paranoia is rife. You hear everyone talking."

U Think that iz bad? Try this on for sIze:

I DOUBLE dare you

Re: Management will not listen while everyone suffers (Score: 1)

NOT helping. That is scary stuff

I've worked in Silicon Valley for about thirty years.

I've done a lot of consulting and contracting. So I've seen a lot of environments. Hundreds, maybe over a thousand if one includes all the interviews I've gone on.

In general, everyone still uses cubes, because you can pack people closer that way and maximize your return on real estate.

When things get crowded I've seen people crowded two or even three into a cube engineered for one (Fritz Companies, Wells Fargo come to mind).

When rooms with doors are available they go to managers first, and software developers second. For some reason the programming that we do in Operations to automate their infrastructure doesn't count as 'software development'; and so quality suffers. But they don't care. We are all replaceable, anyway.

In companies that don't do software development, programmers aren't called software developers, and they don't get offices, either. Large banks, for instance. Maybe that explains a few things.

Competition for corners and spaces with windows is always fierce. Enlightened management arrange things so that these resources are used for corridors so that no competition occurs ( but these same enlightened people still end up with corner offices, with windows, and fabulous, relaxing views, somehow).

The WORST I ever SAW was a place called Fort Point Partners, in downtown San Francisco - the company built Java-based websites for their clients, around the turn of the century.

Their web developers were seated, with their assigned laptops, at what were, for lack of a better phrase, lunchroom tables - long rows of tables with chairs on both sides of each row of tables, so that people faced one another as they ate, er, uh, developed software and websites - I kid you not.

The WORST place I ever WORKED was Zuora, in Redwood Shores. The company was dominated by Asian investors, so maybe that had something to do with it - but, again, everything was lunchroom style - the entire suite was one big room.

EVERYONE at Zuora - except the executives, of course, who had offices, with doors - sat at a desk ... which faced another desk, and was framed by two more desks, left and right ... as was the desk across from each person.

I suspect there were cameras somewhere, monitoring us all, that required unobstructed line-of-sight to every worker's screen. Call me paranoid if it makes you feel better.No other explanation made quite as much sense.

My team were supposed to be maintaining the operability of Zuora's current infrastructure, while also architecting Zuora's next-generation infrastructure.

But it was an interruption-rich environment ... to put it mildly. One hundred fifty people - customer support, technical support, sales, management - all in one large room, all having phone conversations at the same time ... all fighting over two or three small conference rooms, which were usually monopolized by salesmen and managers. It was insane.

I think the worst part of the experience was the ship's bell that Zuora's Sales Department had mounted, on a wall, and insisted on striking, hard, every time they made a sale. I'm sure that was great at motivating the salespeople, and rendered more tangible, the value being added by the Sales department - but at what cost to the rest of the company?

Can you imagine trying to design a forty-story hospital, that people's lives are going to depend upon, in the fire-fighting vehicle bay of a busy firehouse - say, in New York City? That's what it felt like to be a systems architect at Zuora.

So what's the best place I ever worked at? Well, for a short period, Oracle gave all of their systems administrators - all twenty or so - offices of their own, on 4OP4, back in the early 1990s. It was really nice. I gave Oracle 16- and 20-hour days, seven days a week.

My management, in MIS, returned the favor, by accusing me of sexually harassing a junior coworker, via electronic mail ... then, refused to show me the email ... then, terminated me. Nice folks. I hear the sysadmins all lost their offices not too long afterwards.

(See http://web.archive.org/web/20040609092145/http://www.orafraud.org/Oracle/terminator.html for details. Oracle has never disputed the facts, as presented. And Larry just got shoved off the board of directors again, for the Oregon fiasco - which is quite properly being regarded as a possible RICO case. Food for thought.)

For about a month, while I was at Hambrecht & Quist, my boss's boss moved out of the corner office with the fabulous view - and, since we were all moving up a few floors in a few weeks ... I asked if I, and a few other sysadmins, could take over the corner office.

Permission was granted. For a few weeks I enjoyed a view looking straight up Market Street, all the way up to the Twin Peaks, starting from somewhere around Pine and Bush streets. It was really nice, man.

(A big thanks to Gary ... and Norm, and Jim, too - I SO miss having cool, fun IT management. Age and wisdom have been replaced by smug 30-year-olds with MBAs, and the world is not a better place as a result.)

... I have gradually realized that construction workers get better pay, better working conditions, better representation at the bargaining table, and probably have more fun than software developers, sysadmins and database administrators, too.

So if you're thinking about entering the IT industry ... I'd advise you to learn construction, with an emphasis on robotics and architectural design ... so that you can move up, as manual labor is phased out.

It's simply not worth the hassle to struggle to keep up with rapidly changing software, increasingly expensive certifications, increasingly indifferent employers, increasingly complex interoperability issues, shrinking training budgets, a lack of commitment to anything longer than a three-month relationship, subject to change, incredible laundry lists of requirements that go on, and on, and on, and on, and the bunglers that call themselves recruiters, whom are one's only path to employment, today.

I wonder if it really does represent a higher return on real estate. If you can pack in 20% more people, but their productivity drops by 21%, you're losing out.

This is not about productivity it is about control

Construction is fine, if you don't mind working outside, exposed to extreme elements, from 200F degrees in the desert in direct sunlight, to -40F degrees plus wind-chill and rain up north. And also if you don't mind working crazy shifts, driving crazy distances to each new job, or having to pick-up and move 500 miles away on one day's notice. I've seen it, first-hand, many, many times.

While your IT career may involve some of that, mine has been mostly M-F, 8-5, with only 5% overtime from on-call and whatnot, and most every day at the same office, indoors. While your list of issues is quite true and resonates, I expect everyone in any job thinks everyone else's jobs are better than theirs, somehow. Everyone simply overlooks the non-obvious ways those other jobs are actually a lot worse (at least in some ways), which is why the "grass is always greener".

everything was lunchroom style - the entire suite was one big room.

Have you been to the Facebook campus in Menlo Park lately?

Facebook and I divorced a while back. No arguments over things or money cause I am freeeeeee