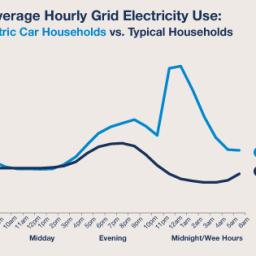 Specifically, many EV owners in the western region (upwards of 60%, according to one California study) â€” and all the EV owners considered in our analysis â€“ have signed up with their utility to get highly discounted electricity between midnight and 7am, in exchange for a daytime price hike. The sudden surge on the right side of the graph above suggests the behavioral effectiveness of this framework: when EV owners enroll in a time-of-use rate plan, they operate in alignment with it.

2) EV owners are much more likely than their peers to own solar panels.

EV rate plan subscribers â€“ with their huge night-time charging spike, bigger and fancier homes, and elevated grid electric consumption in the morning and evening â€“ are a distinctive sort of energy user.
And it appears that there are many more of them on the way.

If I had an electric car, I'd want it charging only at night. Much cheaper that way, at least here in the UK. Is there anything here we didn't already know?

I don't know a lot about power grids, but I presume this is a good thing for them (and presumably environmentally) too; less of a 'daytime spike' in generation this way.

I don't know a lot about power grids, but I presume this is a good thing for them

Well, I do know the fundamentals of power grids, and I'll tell you the "And?".

The normal household chart shows a very grid-friendly usage. It is quite even over time. The one peak and one valley are both comparatively mild and gradual.

The electric car household chart shows an extremely grid-hostile usage. If it's a few isolated households; no big deal; it is probably even a good thing. But if you get a lot of households with this same pattern, the gigantic abrupt peak at 11 pm will put an extremely heavy demand on electric energy peaking, and on the neighborhood grid wiring. Probably heavy investments will have to be made.

To the extent this peak might offset a heavy daytime peak in industrial use, this might be a partially good thing, but the article does not address this or give any related data in this connection. In any case, the ideal would be not to fight one peak with another, opposite peak. The ideal would be to minimize peaks in general.

You could do this for industry by running it 24x7 using shifts, which would be far more plant-efficient anyway.

And you could do it for electrioc car households by having two batteries that are swapped daily. The charging of the swapped-out battery would be regulated by a smart charger to deliver constant current over the 24 hour period, the value of the current being calculated to exactly reach full charge at the end of the 24 hour period.

Yes, I am aware that the customary lithium ion charging strategy is to have a constant current phase, followed by a shorter constant-voltage phase during which the current falls toward zero. So it wouldn't be quite as idealized as I described, but you could come a whole lot closer to ideal than that chart shows now.

The chart is an absurdity (Score: 2, Interesting)

Re: The chart is an absurdity (Score: 0)

A time varying chart of kWh can make sense (although not in this specific case). For example, if you want to know how much energy is stored in a battery at each time, a kWh/time graph is perfect.

What electric car *owners* do when I sleep? (Score: 0)

I'm pretty sure that typically when I sleep, the majority of electric car owners does, too. Their cars may be charging, but as soon as you connected them for charging, you don't have to do anything; they charge up on their own.