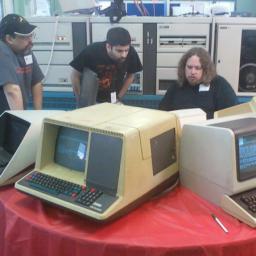 We still have a fully-functional Commodore 64, along with the color monitor, disk drive, joysticks, several game disks and cartridges ... Most of sits in storage, though, with only the Commodore 64 sitting out, proudly, with our collection of obsolete technology (Lazer Tag, Coleco Electronic Quarterback, Microvision Game System, Arcade Defender, etc.).

(*1) The original Z80 took 4 ticks for even the most basic instructions, more unless paired with fast RAM. The R800 in the turbo R can do them in 1 tick. So it's a lot faster than what the clock speed would suggest. For an 8-bit machine, that is.

While I still have it wired up, I must admit that I only really start it when doing research for the openMSX emulator. If I want to play old games, I do it in the emulator: it is just more convenient with save states, reverse, cheats etc.

In the mid-late 90's I found this beast for $5. It just continued to boot loop for no apparent reason, so I opened it up and tinkered with it. I was never able to fix it, though it helped me learn about the internals of a computer. I ended up taking the hard drive out and putting it in a 386. I kept the 80286 AMD processor as well. I think I still have it somewhere.

I know all about retro computing (Score: 3, Funny)

While I have plenty of past (and passed) loved ones (particularly a Sanyo 178^Hkg luggable /**had to leave that typo in lol**/) my "best" computer must be a relatively new eMachine 10 inch notebook. The little guy refused to stay dead (I killed it once by disassembling it and cleaning out some of the "goop" but after two weeks it came back to life). Of course the fan is long gone because I smoke two packs a day (and so does it) but it don't mind :D

Currently it's running the newest Mint and I use it primarily for small & rough Inkscape work. If it ever does die I'll still keep it.

What has this got to do with true retro computing? My point would be that a lot of the love for the old ones came from the fact that they were relatively accessible i.e. cheap, and "good enough". They could be a bit hit and miss but when they hit it was love :) "Making do" has plenty of charm on its own and there are still new-ish computers (not just awesome Raspberries & similar) that carry a lot of the retro legacy in spirit.

By the way I wonder how many used "butterfly keyboard" ThinkPads are still alive and well? Never used them but they looked damn sexy from a distance. I find it "easy" to love small laptops but perhaps it's that old Sanyo* forever leaving its mark on me :)

* I even changed the fuses on that thing several times! Fuses!!! Like those you can find in a dimmer lol! And my beard is only slightly gray.

TRS-80 Model III ... I picked up a ton of shareware games and other utilities at a local user group on 5.25" floppies. I probably still have them in a shoe box somewhere if my wife hasn't discovered them yet and thrown them out.
Commodore 64 ... I discovered BASIC and color!
Timex Sinclair 1000 ... Worst keyboard ever! I got the one with 2K of RAM and remember loading a flight simulator from audio tape. The refresh rate was about one frame per second.
TRS-80 Model 4 ... More user groups, more games, more utilities.
TRS-80 Model 100 ... Now this is the machine I wish I still had. I maxed out the RAM/ROM to 32K and got the 3.5" floppy drive. I also got a 300 baud modem and would read SarText as fast as the the text would download.

I can't resist the C64 myself, but took my first babysteps into the world of computing on a second generation PET, which was like the most amazing thing on earth back in the day. To this day, I'm nostalgic about it.

There's a company that has built modern keyboards out of old C64 chassis. You get a USB connection and the works, but on a C64 keyboard. I'm strangely attracted to it.

I'm building a COSMAC ELF (with a 1802 processor from 1976) right now, for fun and to learn some esoteric machine code and Forth to wrap my mind around - and also because what I would really like to build is a spaceship .

I remember putting together a Windows 98 machine from spare parts. That thing worked better than it had any right. ;-) That was also the last computer I owned that could run Ultima VII natively. Now we have Exult. Never underestimate the power of nerds with free time and an obsession. :-)

Re: Best Frankenstein Ever (Score: 1)

I feel your pain. I've got FF7 CDs somewhere I've not been able to use since I switched from 3DFX to Nvidia. :(

I think my first computer was a TRS80 of some vintage and my friends had Commodore 64s. But, I really liked my second computer which was an Atari ST. It was great for Music and Midi. I suspect it would still function highly at this stage for that purpose, although I finally sent mine to the landfill about eight years ago.